For this project, I had to document my time and create a video in iMovie that told the story of an average day for me. I recorded a narration audio track using GarageBand that I put pictures over to create this video. The pie chart that I used throughout the video was created in Adobe Illustrator. 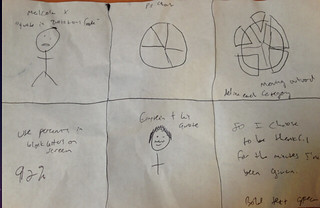 Malcolm X once said, “In all our deeds, the proper value and respect for time determines success or failure.” Time is something we are constantly aware of, yet at the same time completely unaware. We can’t create time; yet always want more of it. This is a breakdown of a day in my life, and where I actually spent my time.

There are fourteen hundred and forty minutes in a single day, and it’s interesting to take a look at all of those minutes and see where they actually go.  The day I sampled is a typical weekday for me, consisting mostly of school. Here’s the 10 categories I came up with. I’ll countdown from the area I spend the least amount of time and go up from there.

In a 3 way tie for last place are the categories of walking, working out, and getting ready. I spend around 45 minutes on each of these areas.

Right above these at # 7 is watching tv, where I spend about 60 minutes of my day.

Coming in next is listening to music and singing, which normally takes up about 65 minutes.

Eating and preparing food only takes up about 85 minutes for me, not even an hour and a half. This is probably because I have more important things to do than spend valuable time eating.

I spend 150 minutes working on my truck; 2 and a half hours. This is what I enjoy doing most, so it makes sense.

Being trapped in class accounts for 330 minutes of my day, or 5 and a half hours.

And finally, the area where I spend the majority of my time is in bed sleeping. Typically I get a little over 8 hours, or 500 minutes.

What is time? Albert Einstein called it an illusion. Time doesn’t stop, so I choose to be thankful for the minutes I’ve been given.

This documentary was a little more tricky than I first expected, it was a little bit difficult for me to get started with. I got my time documented immediately, but didn’t have many ideas for the script. Most of the examples of this project that I had seen started with something like, “I was forced by a teacher to make a video of how I spend my time….” Which I absolutely detested. I really thought this project was a cool idea, and I also don’t think that keeping track of your time-spending is a difficult task. So I decided to start my script with a quote about time. I’m not a huge Malcolm X fan, mostly because I don’t know much about him. But I did like his quote about time, “In all our deeds, the proper value and respect for time determines success or failure.” I think it’s very accurate, and thought it was a cool way to start my documentary.

One problem I encountered was trying to get the image of my graph on the screen as well as a second image, and I solved this with the Picture in Picture (PIP) function of iMovie. This was a tad tedious, you couldn’t do more than one PIP, and it had to be selected immediately when importing the photo. However, it sort of worked for me, and I guess the result was alright.

I really didn’t love my final product, I enjoy making videos and would have preferred to spend the adequate time on the visual side to make this video more interesting.

Here’s a tutorial I followed on making pie charts.

Welcome to your brand new blog!

This is a sidebar and can be changed in Widgets in your dashboard.

You can also modify number of sidebars in theme options!